Red Nose Pitbulls are often thought of as an entirely new breed of pitbull terriers. 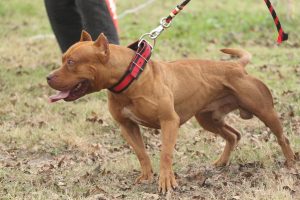 Most non-pitbull owners probably haven’t heard of the red nose pit bull. This guide will simply explain what this specific pitbull breed is and how it differs from the other types of pitbull terriers.

About the Red Nose Pitbull

Now, the differences between blue pitbull puppies and red nose pitbulls aren’t really that significant. The most that you’ll be able to differentiate them by eye is the color of their nose. One’s blue and the other one’s red. That’s essentially it to tell you the truth. Remember, these dogs aren’t their own unique kind of breed so don’t let breeders that are trying to sell you puppies tell you otherwise. They aren’t a new breed of dogs and they shouldn’t be treated like they’re the rarest of the bunch. Some breeders like to inflate their prices by talking their way into scoring big money. Don’t fall for it.